Category: using our powers for good

By Mitzi on November 5, 2009 in miracle on 169th street, Mitzi- all day every day, using our powers for good 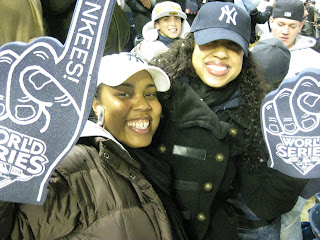 Quick shout to my girl, Nicole for hooking a sista up with a ticket to Game 6 of the World Series last night. There are no words to express what an AMAZING experience it was to watch my favorite team in the entire UNIVERSE win their 27th Championship title in the new stadium. And to think, I didn’t even have to perform unspeakable sexual acts live on the Times Square Jumbo-tron for it…

Seriously ma? I owe you my first born.
All I can say is: WHO’S YOUR DADDY?

By Mitzi on October 23, 2009 in desperate cry for help, it's in the genes, it's not a game out there, using our powers for good, why we as a people can't get ahead

Up until I saw this video, I had no idea who/what a  Lil’ Boosie was, let alone listen to any of his so-called music.  But thanks to this ‘ish right HERE?  Why, that illiterate mumblin’ ass fool in now my certified HERO!

And I’m so serious.

Apparently, homeboy is headed to jail for 10 months at the height of his pathetic career/life. BUT instead of trying to be hard, he goes wide left and says exactly what I’ll bet Lil’ Wayne all the other countless idiots facing/serving time for the “you can take a dumb ass out the hood but you can’t the hood out the dumb ass 101″ charge a.k.a illegal gun possession is thinking:

“Fuck holdin’ my head… And if  I’m lookin’ mad, look the other way bitch! I’m the one going to do time, fuck all dat. Put somethin’ in a nigga account.”

it hurt my heart and my nose…

By Mitzi on October 23, 2009 in it's not a game out there, love be a cellulite cream, using our powers for good 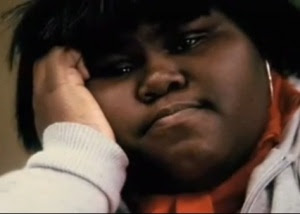 Oh God, so I went and saw a preview screening of the movie Precious (based on the book Push) yesterday evening at the Magic Johnson Theater on 125th…  All I can say is JESUS TAKE THE WHEEL.

Mind you, I am a complete book snob (no surprise there). As far as I’m concerned, no movie will ever be a better experience than an author’s original version.  BUT, I gotta give it to twisted ass Lee Daniels, this ‘ish right here is damn good.
Forget about the graphic nature of the story’s content (extreme poverty, sexual/physical abuse, illiteracy, obesity), the mere visuals ALONE made me wanna simultaneously cry and vomit.  Seriously? Harlem has NEVER looked so dirty, Monique so goddamn deranged or an obese teenager’s skin so freakin’ SWEATY from the mere act of breathing.
Call me crazy but there were moments when I actually felt like I was starting to SMELL the stink of greasy fried chicken and salty pig feet coming off of the screen. *Blank stare*
So while you probably won’t leave the theater feeling anything but depressed, disgusted and in my case in desperate need of a shower,  DEFINITELY go see this movie as soon as it hits a theater near you.

Now here’s some medical news that we can all get excited about: it seems that there’s a new and improved menstrual cramp medicine being tested that proactively targets the cause of the stomach pains rather than trying to ease the pain once they’re already in full effect. Woo Hoo! The medication, known as VA11913 and manufactured by the British company Vantia Therapeutic, will be tested over the next two months on a group of women that suffer from severe cramps.

Fingers crossed the days of being doubled over are numbered…

By Mitzi on September 1, 2009 in honorary white woman, mama gotta eat, using our powers for good 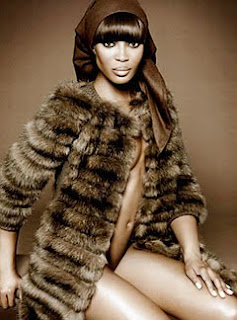 Say what you want about Naomie Campbell but that broad’s got balls.

Whether it’s throwing a cell phone at your head, exclusively dating old decrepit white billionaires, dancing on an elevated platform with no panties,or cussin’ out the entire modeling industry for not using more models of color, homegirl just doesn’t give two shits about what anyone thinks.  And I for one am more than happy to co-sign on the tomfoolery.
Which is why it makes perfect sense (at least to me) that after posing for one of those signature “I’d rather go naked than wear fur” PETA campaigns back in the day, homegirl is now the star of the Dennis Basso fur fall campaign.  And then keeping her response to the whole bruh-ha-ha real simple, “Yes, I still wear fur.” HA! Just like that…
Take notes.

As much as I L-O-V-E my neighborhood and L-I-V-E for the summers, there is one thing that I truly can’t stand- the annual summer rapist.  Every single year since I moved here, there’s been some lunatic running around upper Harlem and Washington Heights making it nervous for women.  And unfortunately, I see that ’09 is not going to be an exception. Sigh.

So this is my PSA to all women living in the upper, upper west side of Manhattan- PLEASE be careful.  Apparently this sicko has a preference- he’s been raping and robbing petite women of all ages.  In fact, this past Tuesday, a 69 year-old woman became his third victim. Like seriously? Who the hell rapes a 69 year-old woman?

Yeah there is certainly a special place in hell for this one I tell you.

Oh and ladies, please don’t forget to share the news with all the males you know as well.  Quite honestly, they should be equally concerned.  ‘Cause it’s all fun and games till it’s your mom/ sister/ aunt/ cousin/ girlfriend that’s calling from the hospital…

There are few things in the world better than good friends and free stuff.

So in the spirit of bringing the two together, MITZIMOMENTS will award the first reader to respond in the comment section with the name of the my neighbor’s bad ass chihuahua that I’ve mentioned/ contemplated tossing out a window several times in the past (most notably for constantly peeing on my doormat) with one GAP gift certificate good for a new pair of premium jeans and your very own eco-friendly Born to Fit tote.
Don’t say I ain’t never do anything for ya’ll!

every day is xmas…

OMG, OMG, OMG! My Mommy (yes, it becomes Mommy in moments like this) just surprised me with a brand new Kindle!!! Woo-HOO, go Mitzi, it’s ya birthday! Go Mitzi, get busy!

Um, actually, it’s not. But yet and still. Big E hooked a sister up for no reason at all, except that she thought it would be something that I’d L-O-V-E. And even though I am SO not the new gadget/ techie-type person at all; I really, really do.

Seriously, tho? There is absolutely nothing in the world better than random acts of kindness. You know the funny card in the mail, ‘have a great day’ flowers on a Wed, taking my car to get washed ’cause you know I HATE to do it or simply having the bed made by the time I drag my butt out the shower. Can the church get an amen? (On the flip side, this is prob the reason I’m so damn relationship retarded… ‘Cause I don’t understand when the person you’re dating doesn’t seem to ever think outside the box and you know, do something special just for the hell of it. It’s damn. My mom is better at his than you and I don’t even got to swing from a chandelier for her…. But I digress.)

By Mitzi on July 15, 2009 in it takes a village, Mitzi- all day every day, using our powers for good 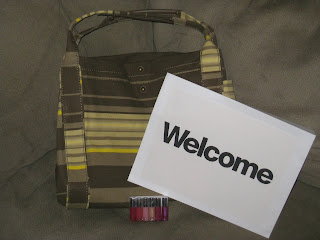 First of all, lemme tell you- yesterday was a complete SUCCESS!

I had so much fun meeting folks, showing off the new dress, taking a bunch of pictures and most importantly, selling more than my fair share of books.  So thank you, thank you to everyone who was able to make it out. It means the world.
But guess what???  All your positive energy worked!!!  When I finally got home last night (cause you know even at a book signing there’s always an afterparty), I found out that I was selected to be the new GAP Brand enthusiast!!
WOO HOO- Go Mitzi, get busy!! Go Mitzi, Go Mitzi!!!!! I am SOSOSOSO excited for the free there are no words.  And trust, I’ll be updating you as the packages roll in.*
Now, if I can only get Louboutin to holla, we’ll be all to the good.
* Check out the new canvas tote and mini lip-gloss 6-pack they gifted me in the welcome kit.
Real talk? 5 out of the 6 of the mini-gloss colors are def poppin’. But at first glance I wasn’t really loving the bag’s heavy olive/brown overtones. You know the kid is all about a bright color. How-some-ever, when I actually pulled it out of the box- it’s super lightweight, more spacious than it looks, has more than enough pockets and the yellow matches my yoga mat PERFECTLY.
READ: even if I’m dripping in sweat, the lips will be glossy and the bag will be coordinated.
Let the choir sing…

By Mitzi on July 7, 2009 in desperate cry for help, it takes a village, using our powers for good

As much as I hate it to do it, I gotta call a spade, a spade: It’s been a bad meaning bad, NOT bad meaning good couple of weeks for the folks. Mmm-hmmm…

First we lost the King of Pop, then VIBE Magazine folded (say what you want but for the record, this was where I earned my very first major magazine cover byline.  Thanks Danyel!) and now the very married Super Bowl Quarterback Steve McNair was found shot up like Swiss cheese in a condo with his 20 year-old ‘girlfriend.’ Sigh.
My people, my people, we gots to do better.
Page 5 of 5 3 4 5 6 7