he ain’t no kinda friend…

By Mitzi on October 22, 2010 in it's in the genes, love be a cellulite cream, made for the maury show, pocket full of dirty tissue, tagging out, too old for the road, why we as a people can't get ahead 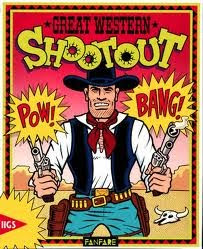 So last night the bestie forwarded me an article from the Detroit Free Press Newspaper. And I swear, it is the craziest story I’ve heard all week. Okay, wait. I take that back. It’s the SECOND craziest behind presumptuous ass Ginny Thomas leaving stalker voicemails. But anyhoo I digress…

Apparently, this past Tuesday afternoon, a Detroit man shot and killed a would-be carjacker when the assailant tried to stick him up at a gas station. The victim, Omar Mixion was filling up his Escalade (BLANK STARE for still pushing such a ridiculous gas guzzler in 2010) when 20 year-old Kenyon Reese Jr came up from behind and demanded the truck at gunpoint.
Well, turns out Kenyon wasn’t the only one packing heat that afternoon. Your man Omar has a license to carry a concealed weapon. And so he refused to give up the keys to the Caddy and ‘ish went DOWN straight wild, wild west style.
When it was all said and done, the wanna be jacker was dead and Mixon was hospitalized with hits under his eye, in an arm, leg, through his hip and backside.
N-U-T-S.
So THEN, the article goes on to report eyewitness testimony from a woman who happened to be inside the gas station when all the madness erupted. And I quote:
“Lonya Smoot said she heard the gunshots when she was in the gas station buying a lottery ticket Tuesday night, playing her favorite four digits: 1-0-1-1. **
‘The manager said, ‘Hit the floor!’ Smoot said. ‘And that’s what I did.’
The station attendant, she said, locked the doors from the inside, but a woman inside who was with the carjacking victim yelled, ‘Oh my god! That’s my man!’ and he let her outside.
Smoot said the other woman came back in with another younger woman and a child. Smoot said she believes both were in the SUV when the would-be carjacker tried to steal the vehicle.“
And while police confirm the eyewitness’s account, turns out Omar’s wife Brenda Mixon and her children were NOT part of the aforementioned group of women and child at the gas station when the incident occurred.
SILENCE.
But wait on it… Here’s the BEST part. And I quote:
“Brenda Mixon said she doesn’t know who was with her husband, who initially denied that there was another woman present.
Right now, Mixon said, she wants to focus on getting her husband of 10 years and father of her two children better.
‘When he gets better, then I will talk to him about everything else,’ she said. ‘That’s my husband, that’s my heart, that’s my best friend right there.’
She said she’s glad her husband was carrying a gun.
‘Whoever has a CCW, do not be afraid to use it,’ she said.”
BLANK STARE w/ 3 LOOONG BLINKS.
So essentially, you co-signing on your man’s trifling ass getting into a shoot out at a freaking GAS STATION over a piece of shit Escalade (insert image of the whole place exploding into high hell) while he’s chilling with his jump-off and her kid?? And that’s your best friend?? Sweetie, what the HELL kinda friends do you have??
*nosedives into the shallow end of the pool*
Yo. As for as I’m concerned, Omar deserves every bullet he took for that reckless ass shit he pulled. Quietly, he really needs to go to jail for public endangerment. Can you imagine how many people could’ve been killed just because his ego was too big to give up the truck?? SMDH.
Oh and as for his retarded, low-self-esteem having, co-signing wife?? She is EXACTLY why even the most random, average men continue to believe it’s cool to behave badly in relationships. Yeah, I said it. ‘Cause for every decent woman that says no to the nonsense, there are HUNDREDS of Brendas willing to look the other way even when the craziness lands on the front page of your freaking local newspaper. Talking about, ‘that’s your heart and when he gets better, you’ll talk about everything else.’ SHIIIIIIIIIIIIIIT, good luck. Had Omar been married to me, after 10 YEARS and multiple CHILDREN, there wouldn’t have been a home for him to return to whether we ‘talked’ about it or not.
Bet that.
*drops the mic & walks away*
**But, before I go, why are they reporting on this woman’s lottery number picks?? DFP staff, I’m gonna need ya’ll to tighten up on those writing skills ASAP. Thanks.