arizona is a bad, bad place…

By Mitzi on December 21, 2010 in desperate cry for help, end of days, going to hell in a handbasket, it's not a game out there, made for the maury show, pocket full of dirty tissue, tagging out 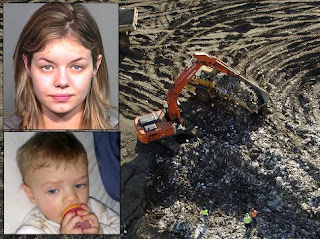 Right… So about Elizabeth Johnson, the chick in Arizona that basically admitted killing her 8-month year old baby, stuffing his lifeless body in a diaper bag & tossing it into a dumpster after she found out on Facebook that her baby daddy was kicking it to another girl???

DEAD FISH EYES
I’m really starting to think that folks should be required to pass some sort of mental stability exam before having access to social networking sites. ‘Cause this is officially doing the most right now. Killing your own flesh and blood because you snooped around and found exactly what you were looking for? Lord have mercy, this is some real life, white trash version of that scene from For Colored Girls… SMDH.
Epic. Parental. FAIL.
And not for nothing, I equally fault the child’s father for this senseless tragedy. Mmm-hmm… sure do. Because if you know that you’re dealing with a psycho chick- why would you put your personal business on freaking Facebook??
And DO NOT even try to tell us that you didn’t think she was capable of the crazy. Not for nothing, I took one look at that ‘extra calm, eyes-wide-open but nobody’s home’ mugshot and I knew beyond a shadow of a doubt… this bish is a killer. Just. Like That.
Meanwhile, he done dates, procreated and been in a protracted custody battle with her looneytunes ass? nope. He should’ve known better.
As far as I’m concerned, he was practically begging for her to snap off and act up.
*makes a sign of the cross*
You know, instead of spending all that time and energy trying to run out the Mexicans, Governor Jan Brewer should focus on keeping the babies safe unstable moms.